hi there and welcome to …
“vegan is unhealthy”
*welcome.. whoever you are…*
Two attention deficiant

– yep exactly –
We’d like to talk about something really great today, guys!
you’d say, that topic suits us perfectly!
Guess what!

virility (also known as maleness)
*whenever it’s over 20°Celcius….*
*I always always wear some some short panties*
let it work it’s spell on you please
can you hear those crickets chirrping?
so guys, a lot of you asked me: Gordon…
you are someone
who gets often reduced just on that cliché of maleness
that hurts, tho’! And I would like to change that now! 🙂
* U stupid huh*
first question: Why are there not as much vegan men?
that’s a tough question *muddled*
stupid beginning huh..
so first of all:
3 out of 4 vegans
no
yes: 3 out of 4 vegans
are women
so 75 %
*i have no idea of numbers, ay oh!”
The next question you might ask yourself could be: why?
And we noticed that when screening “dominion”
There indeed were more women than men in the room
those men also asked: hey Gordon and Aljosha… why is that?
why are there so little vegan men?
– I thought you gonna say: those men actually wish they were women. –
*I believe that all women have a vagina*

To start right at the beginning: one of the main problems
or the main reason is
communication in media about meat
that it’s manlike, invigorates you..
consumed when grilling, together with muscular shirtless men
and beer
and spitting men
a lot of proteins for sure
and then u strong
* just me, my meat, and the flame on my grill*
* Fuck yourself *- German accent
spitting men?
whatever…
The industry of media they often ask me:
if I could play the male role in their spots
and as I said
it makes me sad!
because it’s a lie
now, imagine how hard it is
as a man to not define themselves
as such because of the “male role”
but do their own thing
and that asks for lot of courage
And I think that also asks for real maleness
to hold back the clock
to not define yourself either because of objects nor behaviors
Aljosha, let’s travel back in time for some years- notionally
Men where hunters, killing mammoths
feed the family
while women stayed at home and looked after children
and picked some plants, aight?
exactly
the typical heroic image of a man
this image established till nowdays
and it seems to be a source of believing we’re real hunters
But all we do is
far away from what happened back in the days.
We go to grocery stores
buying Big Bears sausages in plastic packaging
and call ourselves “hunters”
BARGAIN HUNTERS
oh nice!
let’s make the experiment: Go into a library
and have a look where men are compared to where women suppose to be
Women get suggested some nice salads, or healthy fish dishes
with men it’s the steak, grill, beer, football uh…
*I’m not a squeeze*
notwithstanding the above, Aljosha, past is not that important sometimes.
what humans did back then..
we’re human,
so fully developed and evolved!
I don’t really believe evolution just stopped a couple thousand years ago
we’re still evolving!
We shoud! actually…
So it doesn’t make sense to just say: Because it has always been like that before..
that’s why it’s right
*exactly*!
You know the saying no pain-no gain? (Indian knows no pain is a German saying)
yes I know that one

we’ve been put across to that phrase since childhood
men are not allowed to show emotions!
Because it’s not manly..

The most important thing
it’s not manly at all
to pay people who kill innocent, capable of suffering
defenseless animals for
just 5 minutes of food pleasure, we don’t even need!
I’m sure some of you go like: “Lions, bears…
in nature everything is quite brutal.”
Yes, but we’re not a lion!
We are conscious beings
we’re not reliant to meat
we’re not living in the forest
we’r not licking our anus’
we also don’t sniff anus’ for greetings
except Gordon sometimes and me…

What this planet earth is lacking
is what get’s trained down
compassion
you’ve probably heard about that before
we don’t own this planet!
we get born and we rule everything!
we’re guest like every other being
like every other human
and we act like fools
and we really act like as if we think
we own everything
we can do whatever we want
because we’re on top of everything
and we define who’s on top and who’s not

Last but not least, for me virility for me means
to be strong and confirm your own feelings
and confirm to not exploit innocent creatures
or rather pay people to kill those creatures for me
Eventually we continue saying
release yourself from stereo-typed thinking
yes, we used that term “manly”
because it’s socially established
as a picture
Finally it’s not “manly” to show strength, also not “female”
people maybe should fundamentally change their thinking
and standing up for others categorically
and to call that “strong”
it should be human – to show strength
there’s a psychological study
which said, that vegan men
get interpreted as less “manly” from other men
espacially (!-finger)
if they’re vegan because of ethical reasons.
if they’re compassionate with other living beings.
are you kidding’ me?
* What can I say…
Chop the head off!*
We’re aware of the fact that there’s a social pressure for men
to fullfill that image of being “manly”
plus: it’s so simplified!
we don’t have to see the suffering from animals
as we said before
we go to the supermarket and get some already packed Big Bears Sausage
it has nothing to do anymore with what it used to be
it doesn’t remind of a thinking and emotional living being.
In conclusion, really important:
especially for men out there
we would like to reinforce you, to distant yourself
from that classical role of men
While showing the world out there
with compassion
that you want to change something and that you actually care for others

which means that you don’t want to support that hole system like this anymore
Honestly
I said it at the beginning, but I’d like to repeat it
There’s nothing “manly” nor “strong”
to just rush over innocent living beings.
It’s all about…
we really have to change something!
we can’t wait for others to do it!
Now, go hard! Change something in your life.
go step by step
it’s not about to ban all the meat out of your diet by tomorrow completely.
but get more information!
watch some of our other videos!
I know, if you just saw this video now
the topic might not be not as dramatic as it is
but there’s a lot behind meat consumption
in environmental terms
health wise
especially the animals behind it all
so rummage through our videos
Watch the suggested documentary movies linked down below
and share this video!
you can also activate the bell down below

so that more men get vegan!
CHALLENGE! for you guys…
link one man to that video
who has to watch this video
that’s your job!
you can win a XXL testosterone syringe
joke
so.. That’s it!
i had a blast with you Aljosha
Thanks, “the nipple squid man(?)*
have a wonderful rest of your day! 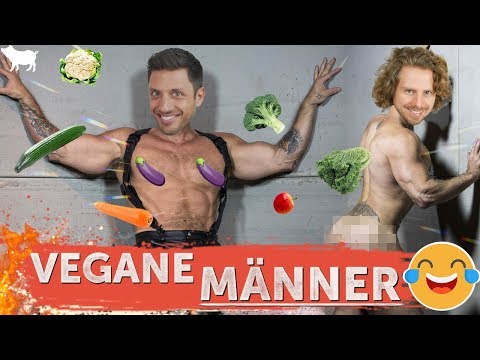