Hey Food Tubers, I’m Tim Shieff. Athlete,
world free running champion and also a vegan.
So my mates here at Food Tube have come up
with a vegan friendly shepherds pie. It’s
hearty, it’s healthy and you definitely don’t
have to be a vegan to enjoy this.
First thing you want, sweet potatoes. They
are one of the biggest staples of my diet.
You want to put oil on your sweet potatoes,
sprinkle some salt on there really bring the
flavour out and of course, the pepper.
Spread
the oil around. Then they go in the oven 180
degrees, for 35-40 minutes until they’re soft.
Now, I want to make the base. Large pan, medium
heat, drizzle in the oil. I use flax oil,
slightly healthier for you than olive oil.
First things first for the base, celery. Right,
celery’s chopped, I’ve got to sweat it into
the large pan. Next two carrots. Nice to mix
the colours up then you know you’re getting
a range of vitamins and nutrients. Eat the
rainbow and you’ll get everything you need!
Carrots done, in they go. Two onions. My hand
is cramping up. I’ve not got the stamina in
my hand yet, I can do all the back flips in
the world but it doesn’t mean I can chop vegetables
for more than ten minutes.
Onion done. Sweating it out with the other
vegetables.
Don’t touch, I shouldn’t have done that!
Make a space for the garlic so that it gets
in there and cooks straight away. You can
leave the skin on it you don’t need to peel
it.
One more. Right. Onto, the rosemary.
Going against the grain, peel them. Rosemary
onto the knife and then drop that in with
the garlic.
Lastly for the base, coriander seeds. You
want about a tablespoon into the grinder,
by hand, get a work out while you’re preparing
dinner. Earn your food. I think that’s good.
Pour that in. Smells so good already. Now
you leave it to sweat for about ten minutes.
Whilst those vegetables are sweating away.
You want to cut up your mushrooms.
450 grams. I wanted to put in a whole kilo
but they told me they’re wouldn’t be much
room for anything else.
Come on, that’s worth a laugh or like. I’m
not a comedian. I’m a free runner.
450 grams, beautiful white chestnut mushrooms.
I think Mushrooms are one of the most underrated,
healthy vegetables.
Onto the sun dried tomatoes. You want four
incredibly delicious really brings out the
flavour in everything else around it. I went
vegan a year ago, I just wanted to try it.
I felt results within two or three days. I’ve
had amounts of new energy I haven’t felt since
I was ten years old. My joints feel a lot
stronger I feel a lot healthier.
100 grams of vegetable stock of course.
Now you leave that to cook down for ten more
minutes.
So now that’s been cooked down for ten minutes,
you want to thicken it out with some lentils,
this is instead of your meat and now add some
flageolet beans. That’s really thickened it
up, given it some weight so you don’t feel
like you’re missing anything in the meal.
Now everything’s done but the topping we’re
going to get the sweet potato out the oven
and mash it up.
Ohh, look at that! Keep the skin in there,
good nutrients, good crunch within it. Now
that’ mashed put it down.
I’m going to ladle it out now, bring it a
little closer. We’re going to get that sweet
potato mash on top. That is looking great.
Now we’re going to add some breadcrumbs and
some rosemary. As much breadcrumbs as you
like, give it a final topping crunch. If you
use gluten free vegetable stock as well then
this whole recipe up to the bread is gluten
free.
Pop it under the grill for five minutes so
it crisps up nicely. Just to finish it off.
There we have it. Now the best part. The tasting
. Serves about 6 people. Look at every layer
of that. Of deliciousness.
It hits every spot of your tongue. Crispy
top then you’ve give the soft orange sweet
potato underneath. It’s unbelievably good.
If you want to check out more recipes from
the foodtube team subscribe to Food Tube.
If you want to check out my channel for more
flips and spins, go to youtube.com/livewire.
There you have it Food Tubers, Vegan Shepherds
Pie.
if I can make it, you certainly can as well.
Try it, you’re going to love it, I really
love it, it’s incredible. Taste delicious.
Thank you! 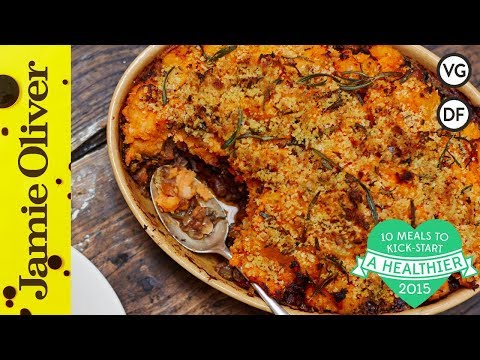 All credits go to Jamie Oliver