1 full but not heaped tsp of psyllium husk powder

Now that I know it won’t splash, I’ll increase the speed
That’ll be enough. We just need it to mix well. Don’t over mix it

Now divide it as you like. I’m going to make 2 buns

Just drop the amount you want but unlike the lupin ones, we need to spread this one

If you don’t flatten it a bit, it won’t cook and rise nicely

Now just with spoon, flatten it just a bit but keep it thick

See how still thick it is yet has a flat top. Like a thick desk

Now that it’s cool enough to handle, will show you how soft it is

See how nice and soft it is

It’s perfect for stuffing, since it is nice and soft and thick

Use for burgers, eggs, cold meats, keto falafel. It’ll be great for that

Now see it i the inside. You don’t even need to use a knife since it puffed and created hollow space in the inside

It’s just a real bread. Ok it won’t taste or feel like real bread coz it is keto after all and the bun is softer than real ones made of real flour

But it is the best tasting keto bun I ever tried and the closest to real thing. And you can’t taste the almond flour in it

It is not gewy or slimy 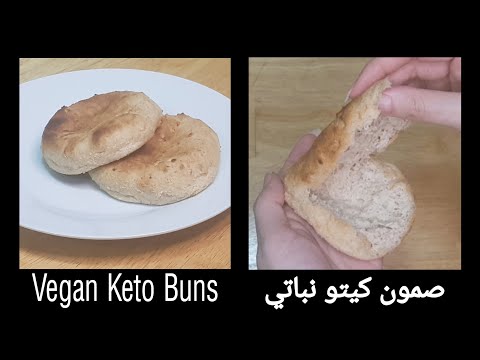