Very good Welcome to Vegan Dimension.
I’m happy because finally I bring you the
Ultimate Vegan Burger recipe. So I have baptized them
to my vegan beef burgers
I finally have a version that looks like
commercially available
on the street. Much better than “vegetalex”
that there is in Argentina and quite quite
similar to the ones here in the
market so I’m happy because they are
weeks I’ve been investigating that in the
kitchen trying lots of
ingredients buying ingredients online
quantities … I did about 15 experiments and nothing, I finally have a recipe that is
worth posting on the blog. The other day
from the vegan burger workshop
I recommend that you see it because there we talk about a lot of ingredients
we talk about a lot of things and there’s
some great burgers and I made a
beta version of “Ultimate” but good
now i have the final version
Also never “the final” I always tell people “improve it so that I can also improve it like that.
I hope you guys will try them on
home send me your comments.
I am also improving this version.
Which is quite similar to the version
beta I did the other day in the workshop
but some things change some
quantities of ingredients. The three
rarer ingredients that you have to
look for are potato protein
xanthan gum and methylcellulose that
I have here Methylcellulose or carbomethylulose CMC in Argentina or
Latin America potato protein and
xanthan gum. These are the three
rarer ingredients that have to
get for this recipe. Although if not
they have them
these three can replace them with
cassava starch or potato starch if
there is no other, although it will not be the
same texture the taste will be good
what do I know but the texture is not going to be the
same but I already tell you these three for
potato starch or potato starch
and xanthan gum if possible gum
xanthan or potato starch – methyl
cellulose. ok?
that is, as long as you have these 3
they will no longer use starch
potato. That’s what i wanted it to be
clear but again it was not very clear in the workshop and people
asked me a lot about this. Something that
wanted to comment that this video is a little
Frankenstein because I’ve been doing in
pieces because every time something came up
well I said “ok this I don’t have
to touch it anymore because it’s okay so I
recorded it. For example says apart
the broth the preparation of the meat
own that you guys don’t ally this
process is as follows make the juice of
carrot (beetroot, sorry) and the soft body the
ingredients make the carrot juice
with molasses then they make the broth then
they prepare the meat and stick it and wait now
is next to the burgers and
can cook both on the grill or the
they can cook in the pan with a
little oil or alone
great in any way because it
stick well that’s the function of the
methyl
No, Ilse is enough. Alright let’s see now
how are they made then these Ultimate
Vegan Burger. The final version to be able
post here in vegan dimension.
First we are going to peel and chop one
medium or small onion

now we are going to put in a frying pan three
tablespoons of oil
and here we fry the onion
when the onion is tender we add two
cups soy textured
fine
and for a minute we mix it well with the
onion and oil and this will give
a special flavor
we put out the fire, it already smells really good
Now what I’m going to do is a juice of
beets with 80 grams of beets
boiled with 250 of mineral water or
Cup. I will also add a
tablespoon of molasses if you don’t have it don’t put anything else, don’t put sugar on it.
we beat it
and now we filter the juice
and now we are going to color the soybean with 3/4
cup of our homemade beet juice
soak them all well
we mix it well we will leave
stand for 10 minutes before
add our umami broth
(Dry shiitake and or pine mushrooms)
any dry mushrooms works…
I am going to keep this in my little bottle
for mushroom powder here I have shiitake
I already have my powder with a funnel
pine mushroom mixed with mushrooms
shiitake and this has a lot of umami flavor
that I want to get to flavor
to my burgers. To make our special broth
I’m going to take two …
2 cups of water I will use mineral water
because I don’t want chlorine in this broth no
I want the umami flavor to ruin it. so I have to use good water
here I have some mushrooms, here we have
tomato concentrate I’m going to use 6
tablespoons nutritional yeast 2
tablespoons
half a tablespoon of monosodium glutamate -optional
a little more this is the umami flavor
concentrated
that’s optional but you know you want
more umami flavor a little salt here
I have a little bit of wakame seaweed too
we are going to throw it and I am also going to
pour a teaspoon of our powder
of our mushroom
a handful of spinach and we put it to
boil
we boiled it for five minutes
after the time we put out the fire and what
Let it cold down. Always covered. Once he
broth is cold I will liquefy it or
process in the same mixer where
pulverize the mushrooms
that we also have a little more
with this broth we will hydrate the
soy meat.
So here we have soy meat
that has been soaked with beet juice and that
we have put the mushrooms (powder)
Okay, let’s hydrate it a little bit more
let’s start little by little because we have to
be very careful with the amount of
liquid we use. I’m going to take it, for now,
half a cup of our broth that I’m going to
sift a little so that the
pulp that. It’s still warm, nothing happens
I made him 3/4 cup okay? well that pulp is no longer
miss and now we are going to soak all
soy meat

squeezing it to absorb all the
taste
and now we let rest 10 more minutes.
I will save the rest of the broth for
if I need a little more and such in the
fridge. This meat does not have rice but
which is made with beetroot juice
and with the broth so that it has more flavor
umami with my mushroom powder
a teaspoon this mushroom powder what
can put together with the juice of
beets after beet juice
or before or after the broth
Still as you see the meat is loose
so now you have to join it. For it
we will use potato protein and
we are going to use xanthan gum and also as
a glue i’m going to use methyl cellulose
Let’s first think two tablespoons of
potato protein
we spread it well through the meat
now we are going to add 15 grams of methyl
cellulose. I will leave you all the links of
where I bought the things in dimensionvegana.com, there in the post of the
Burgers. It will be two tablespoons we mix it here

and finally I’m going to add 2 grams of
xanthan gum
what would be a teaspoon
it will take it a little
we integrate these ingredients well
It’s very important
As you can see, the meat is all good
well glued joint
I’m going to pass it to this tupper and I’m going to
leave to rest in the fridge for 12
hours as possible at 4 degrees
The state mass at rest for 12
hours what I’m going to do is put it
I’m going to put a piece of paper here to put the
burgers quickly and before
assemble them I will grate a little
coconut oil that’s so cold it’s not
frozen from fridge because the truth that
it’s not too hot quickly we grate
a little
this amount which will be half a cup, suppose … we mix
I’m going to mix it with a spatula because our hands
they can
heat the oil and melt it
if they don’t have coconut oil we will
add sunflower oil so you have
a little fat or you can add
margarine too.
Vegetalina can be thrown in Argentina
grated vegetable oil. I can´t find hard vegetable oil here in Spain
vegetalina is good
hard to assemble the burgers we will put
a mold that is moistened with water
we put a burger bun about
I am going to put about 120-130 grams
we form
for other
Well the iron is already hot
you have to turn around several times
while they cook
for about eight minutes. Every so often
we are rotating
good
The other day I didn’t show you the cheeses in the workshop. Here I have the camembert
I don’t want to touch her much because I have
than putting gloves on to manipulate them but
well here our camembert has already been perfect and we will see how it
makes camembert, roquefort cheese for sandwiches
for pizza and let’s talk a lot of
things in the advanced cheese workshop like this
do not miss it on 24. May 24, 2020
We keep the cheese. And I’m not going to do any
burger to eat because these weeks
They were eating so many burgers that I can’t even see them! I swear I can’t even see them …
But the people who have eaten them tell me that they have
freaked out
so they are preserved so they can be preserved
on plastic wrap or baking paper
and freeze them raw as I already told you in
the workshop. If you liked this video by
please like to subscribe to the channel
see you in the next video see you in
the cheese workshop on the 24th you won’t
miss thank you very much for entering
Vegan Dimension
and for watching this video. See you!!
σου, γεια σου …
γεια σου … 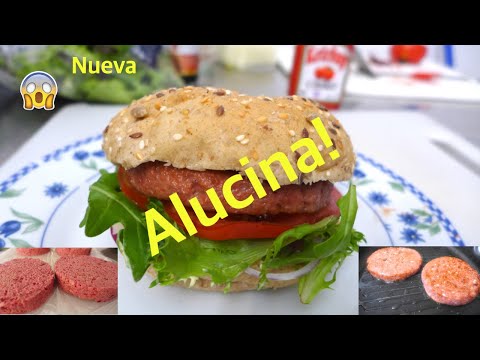 All credits go to Dimension Vegana