I’m chef John Kohler and I’ve been preparing
delicious raw recipes for the last 17 years,
since I got into the raw foods lifestyle for
my health. Today I’m going to making a recipe
for you that is nut free, oil free, vegan,
raw, plant-based, whole food, (cow) free,
low glycemic, glutton free, and more important,
anti-oxidant rich. It’s going to be so delicious
and let me go ahead and introduce you to the
ingredients that I’m using today. First we
have homemade coconut shreds. I’m using coconut
shreds that are a whole food. Unlike oils
that are 100% fat, the coconut shreds have
the fiber. Next, I’m not using a sugar alcohol
low glycemic sweetener; I’m using a real sweetener.
These are just soaked dates, about 1 cup worth.
Next, instead of cocoa, we’re using a much
healthier alternative that doesn’t have the
stimulant side effects, harrow powder. Next
we have the avocados. 4 avocados. The avocadoes
give us the creamy aspect of the recipe without
the nuts. Next we have the caviar of 2 vanilla
beans, and finally we have the antioxidant
blueberries. We have about 2 cups there. So,
these are the ingredients in my recipe, and
if you notice, these are all whole food ingredients.
One of the reasons I got into raw foods is
for my health and I learned that one of the
reasons why the standard American diet is
so bad is because of the processed foods and
even if you go raw, you may be eating a lot
of processed foods. So, my recipe today is
not using any highly processed foods such
as sugars, alcohol other low glycemics, and
once again, the glycemic index is only one
aspect of a food. There are so many other
aspects that you should be concerned about,
like if it’s processed or not. In any case,
let’s go ahead and make this delicious pie
recipe. First, we’re going to make the crust.
We have a standard 8-inch pie plate here,
and we’re going to take our whole coconut
shreds and put that into the food processor.
Let’s go ahead and put this top on the food
processor, and we’re going to just run it.
So, now this is the consistency we want, just
that the coconut is sticking to the sides
of the food processor but not yet turning
into a butter. So, now we’re just simply going
to spread this mixture. Once again, this is
100% coconut crust, and what happens is, the
oils come out and the oils will help the crust
to not stick to the pie pan, and plus this
is all stuck together enough so that it’ll
all stick together when you mold it with your
fingers here. So, I’ve molded al this coconut
into the pie curst, and you can see it’s in
there. Next, let’s go ahead and process the
filling. First, we’re going to take the 1
cup of figs and drop that into the food processor.
We’re just going to run the food processor,
I don’t know, 30 seconds to kind of get them
mashed up a little bit before adding the other
ingredients. So, the 4 avocadoes are going
to go in. the avocadoes are going to act as
our creamy filling instead of using nuts that
are so common in raw food desserts. The half
cup of harrow powder. The caviar of 2 vanilla
beans. This is going to give us that nice
vanilla flavor. Finally the half cup of fresh
blueberries. Now, the blueberries do contain
a pectin that’s going to help let the mixture
firm up a little bit. Once we’ve got that
in the food processor we’re just going to
process. GO ahead and turn off that food processor.
Now, you don’t want to rub this too long or
else you’re going to get too liquidy. Right
now it’s actually standing. This is the nice
perfect texture you want. So, now we’re going
to go ahead and out this mixture inside our
pie, and look at that. That looks like a nice
rich chocolate mixture, but you know what?
There’s no chocolate in here. This only contains
delicious, healthy harrow powder that’s rich
in fiber. Get every last bit of that filling
out of the food processor and we’re just basically
making this level across the top of the pie
crust. We’re going to then take our blueberries
and just cover the top of our pie with a single
layer of our blueberries. Once again, this
is a whole foods pie, not made at whole foods,
but it contains whole foods, because those,
in my opinion, are the freshest and the best
and what we want to eat the most. It’s a delicious
alternative and healthy guilt-free alternative
to cocoa pies. Go to hotrawchef.com to vote
for me. Don’t forget. Do it now. That’s hotrawchef.com
to cast your people’s choice for me, John
Kohler. 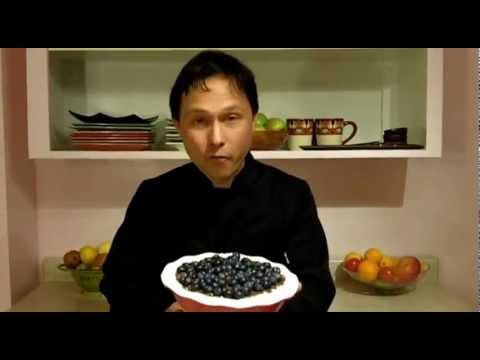 All credits go to okraw