Oh and other thing: HMF is in everything.
It’s not just honey. In particular it’s in
roasted coffee, dried fruits and — wait
for it — baked goods. There’s tons of it
in toast.
You want to be worried about something vis
a vis honey, be worried about this: colony
collapse disorder. This is the global trend
in recent years of worker bees just peacing
out, leaving their queen and babies behind.
This is a phenomenon that endangers not only
your honey habit, but all the crops you eat
that honey bees pollinate, which is a lot.
These bees I’ve been showing you live on the
campus of Berry College, just north of where
I live in Georgia. They’re happy bees. They’re
looked after by Berry student Shelby Koch.
“It’s kinda funny being the beekeeper around
here. You know, you walk out of lunch after
classes, and you’re like — oh yeah, there
are my girls foraging in the holly next to
the science building, or whatever, you know?”
And they don’t just eat landscaping nectar
— they eat a varied diet of wildflowers
and clover. One theory as to what’s driving
colony collapse disorder is monoculture — bees
feeding off of these large-scale agricultural
operations with just one crop in them.
“Kinda like, you know, vegetables are great
for you, but if you only ever ate vegetables
and didn’t get any source of protein from
anything, you probably wouldn’t be doing as
well. It’s kinda the same idea with bees,
and so I’ve seen some people cite that as
an issue.”
But, Koch says, nobody really knows what’s
doing this. Could be a lot of things.
“Fungicides negatively impacting symbiotic
fungi within the hive. There’s large concern
over large-scale pesticide usage.”
Yeesh. Well, I’m glad she’s working on it.
I don’t really have much for you here, other
than to say that if you want to be worried
about something having to do with honey, be
worried about that, and be aware that our
choices as food consumers might be a causal
factor.
But, yeah, cook your honey, it’s fine. 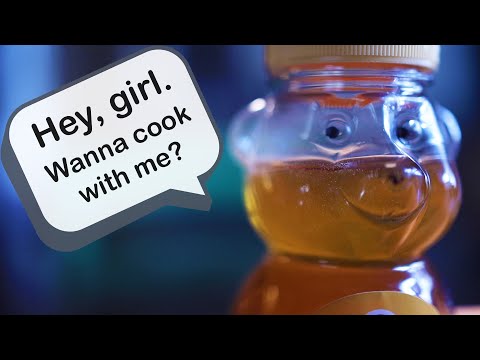 All credits go to Adam Ragusea